BigSurv18 and the Green City Hackathon

One of accompanying events of the BigSurv18: Big Data Meets Survey Science conference in Barcelona last week was the Green City Hackathon. The challenge was as follows: The city of Barcelona wants to reduce car traffic, in particular by promoting use of bicycles. The city is collecting quite a lot of data on bike use, especially about the public city bike share system “Bicing”, and needs the data analyzed, including descriptives, predictions, analytic tools, etc. The goal of the Green City Hackathon was to design or at least propose such analyses and/or tools, dealing with bike usage, safety, complaints, or other related issues. The data challenge primarily used data coming from the Open Data BCN portal, a key unit in the Barcelona Digital City Plan, but other data sources were also permitted.

The full code used to generate this post can be found here.

The hackathon situation is unlike much of academic research experience: working with people met for the first time, who have different backgrounds and skills, need to get up to speed fast, extremely limited time, little knowledge of the subject matter, need for presentable results, acceptance of “no results” as results, i.e. plans for future actions (analyses, data collection, etc.) instead of findings and conclusions.

After a quick brainstorm we (Saleha, Sakinat, Vera, and Marta) decided to focus on the most basic barriers to using the Bicing system: lack of available bikes in Bicing stations and altitude (Barcelona is a hilly city!). To our surprise we found that these two issues are related.

First, we wanted to find out a little about how the bikes are used. We plot bike use (the number of Bicing bikes in use) over time for a random weekday in September. The graph below clearly shows the peaks and valleys of bike use during the day: the morning peak is about 8.45 AM followed by an evening peak just before 7 PM. Other weekdays exhibited similar patterns. This suggests that Bicing bikes are used for commutes to work or school.

The pattern of morning and evening peaks can also be observed on weekends, but the peaks are much lower, and later in the day.

Looking at the whole month, one can distinguish weekdays from weekends (darker blue). Weekday anomalies (lighter blue, September 11 and 24) turned out to be holidays (according to this website). For some reason the data end on September 27, and so does the plot.

Decomposing the time series reveals daily seasonality as well as weekly cycles, the latter interrupted by the mid-week holidays. 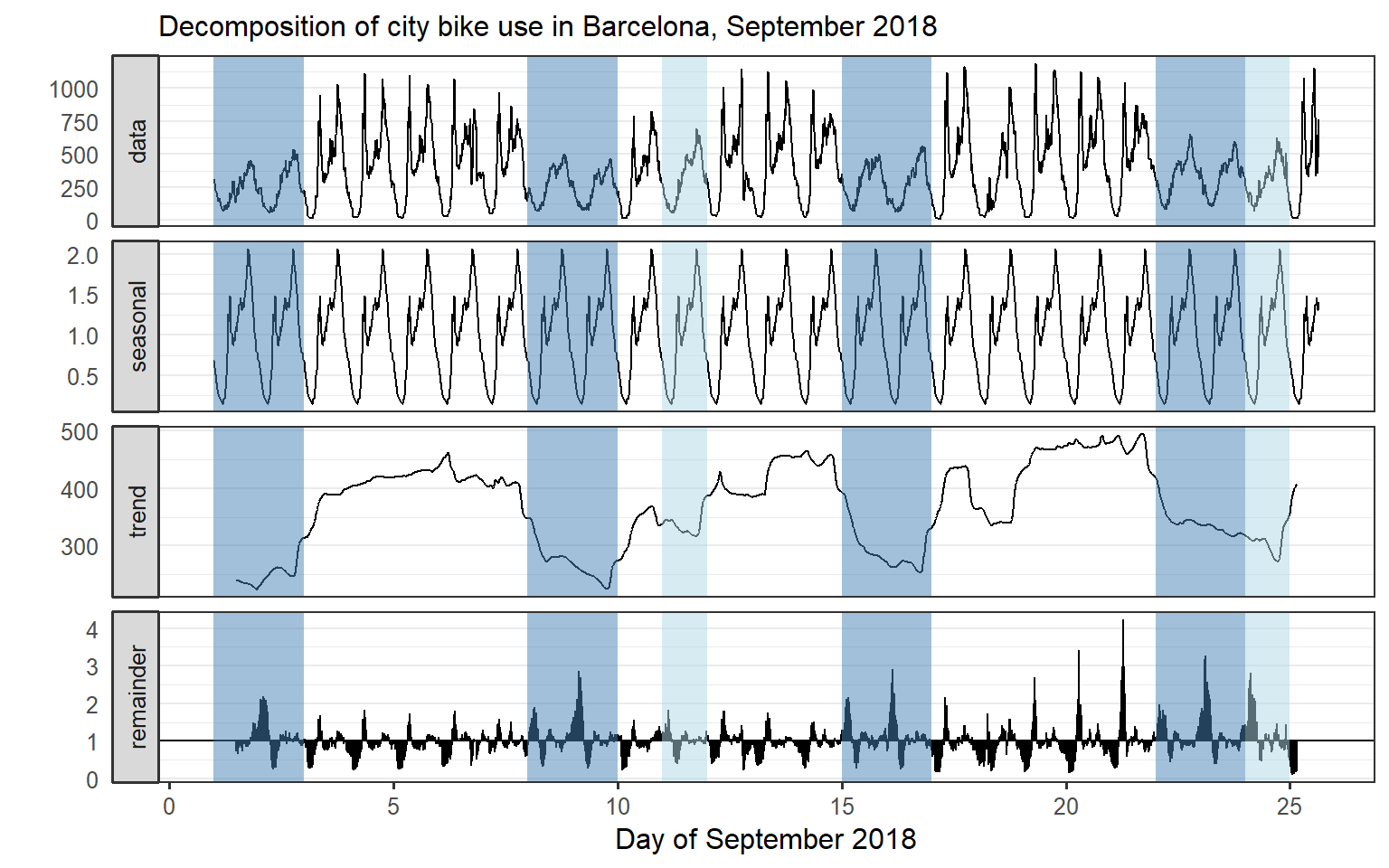 We also wanted to see if altitude has anything to do with the type of station, i.e. whether it’s for mechanical or electric bikes. The map below suggests that electric bike stations, which account for about 10% of all Bicing stations) are relatively evenly distributed across the city.