General population surveys with representative samples should have a similar education structure as shown by data from administrative sources, especially if survey weights are used. In this post we compare sample aggregates from 15 cross-national survey projects (including the European Social Survey, the World Values Survey and the European Values Study, and others) from the Survey Data Recycling database with educational attainment statistics from the OECD. We find a strong positive correlation between the two education variables, with some interesting deviations that we start to investigate. The data are available for visualization and download via this Shiny app.

The Survey Data Recycling dataset (SDR) version 1 includes selected harmonized variables from 22 cross-national survey projects, including measures of educational attainment - the highest level of education completed by the respondent. SDR only includes surveys that are intended as representative for entire adult populations (for other selection criteria see here, for more information about SDR and the data see the project website or this post). For general population surveys based on representative samples one would expect survey aggregates of educational attainment to closely track educational attainment measures from non-survey sources. In this post I compare shares of individuals with at least upper secondary education in SDR surveys to OECD data.

The SDR project harmonized selected variables on political attitudes, behavior, and basic sociodemographics, from 22 cross-national survey projects covering 142 countries/territories between 1966 and 2013. From the SDR v.1 dataset I selected only whole country samples (i.e., excluding split-ups like West and East Germany or Flanders and Wallonia). For calculating shares of samples with at least upper secondary education I only used the target variable “Education level” (t_edu), not “Schooling years” (t_school_yrs), which is also available in the SDR v.1 dataset. I used respondents in the 25-64 age range and applied calibrated case weights (t_weight_l1u_2). More information about how these variables were constructed is available in the SDR documentation.

Let’s start with the OECD data. The function get_datasets from the oecd package gets the list of available datasets. search_dataset searches for keywords among the available datasets. The Educational attainment and labour-force status database has the code NEAC_SHARE_EA. With this code, the database can be downloaded with the get_dataset function.

Note: The entire database is huge and takes several minutes to download. According to the oecd package instructions, it is possible to specify a filter in get_dataset. This would be great, since I only need a small subset of the data, but unfortunately I haven’t been able to get the filter to work.

After downloading the database I select the subset I’m interested in:
1. the indicator “Share of population by educational attainment” (NEAC_SHARE_EA),
2. the education level measured “At least upper secondary education” (L3T8),
3. year range excluding “Latest available year” (code 9999),
4. the type of the measure VALUE (as opposed to standard error, SE),
5. both sexes,
6. age range of 25-64 (Y25T64),
7. only individual countries, i.e. excluding country groups such as the G20 or the OECD average.

But first, all the packages:

The SDR Master File, which contains the harmonized individual-level survey variables, can be downloaded from Dataverse to R with the the dataverse package. The stata version of the file has the id = 3006244, a parameter in the get_file function. The data file is pretty large, so it takes a while to download.

The correlation (Pearson’s r) between the SDR percentage of respondents with at least upper secondary education and the corresponding OECD share is 0.67. The scatter plot in Figure 1 visualizes this association. While most of the samples are relatively close to the 45-degree line (as expected), there is a worrying group of observations with survey proportions substantially lower than the proportions from OECD data. Red points indicate that the survey proportion is less than half of the OECD proportion (the 50 percent threshold is of course arbitrary). 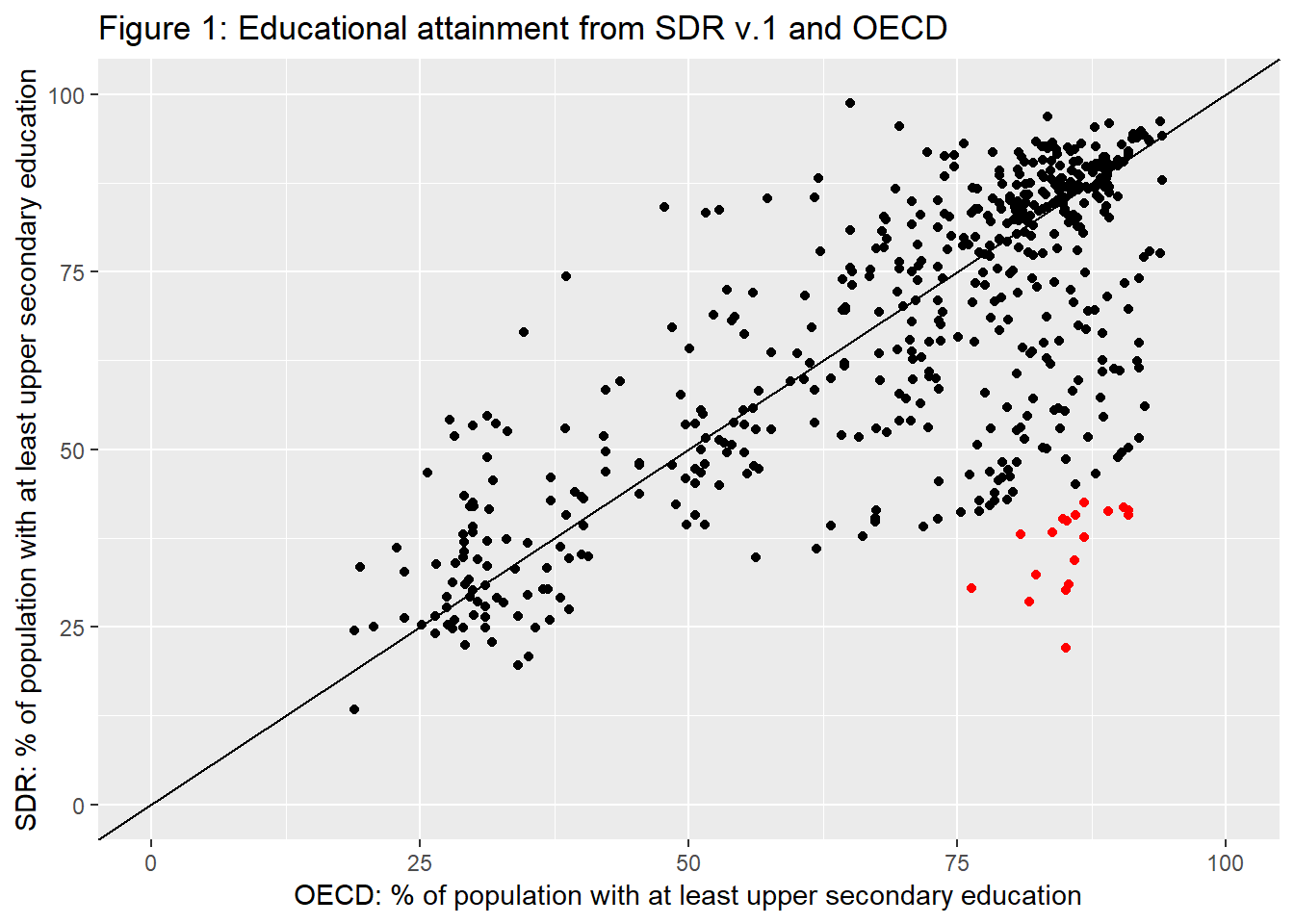 Figure 2 presents separate plots for each survey project, showing that most of the problematic surveys are in the International Social Survey Programme (ISSP), but also in ASES, CDCEE, EVS, and WVS. This Shiny app enables protting the data by survey projects and makes available the data: https://mkolczynska.shinyapps.io/sdr_oecd_education/. 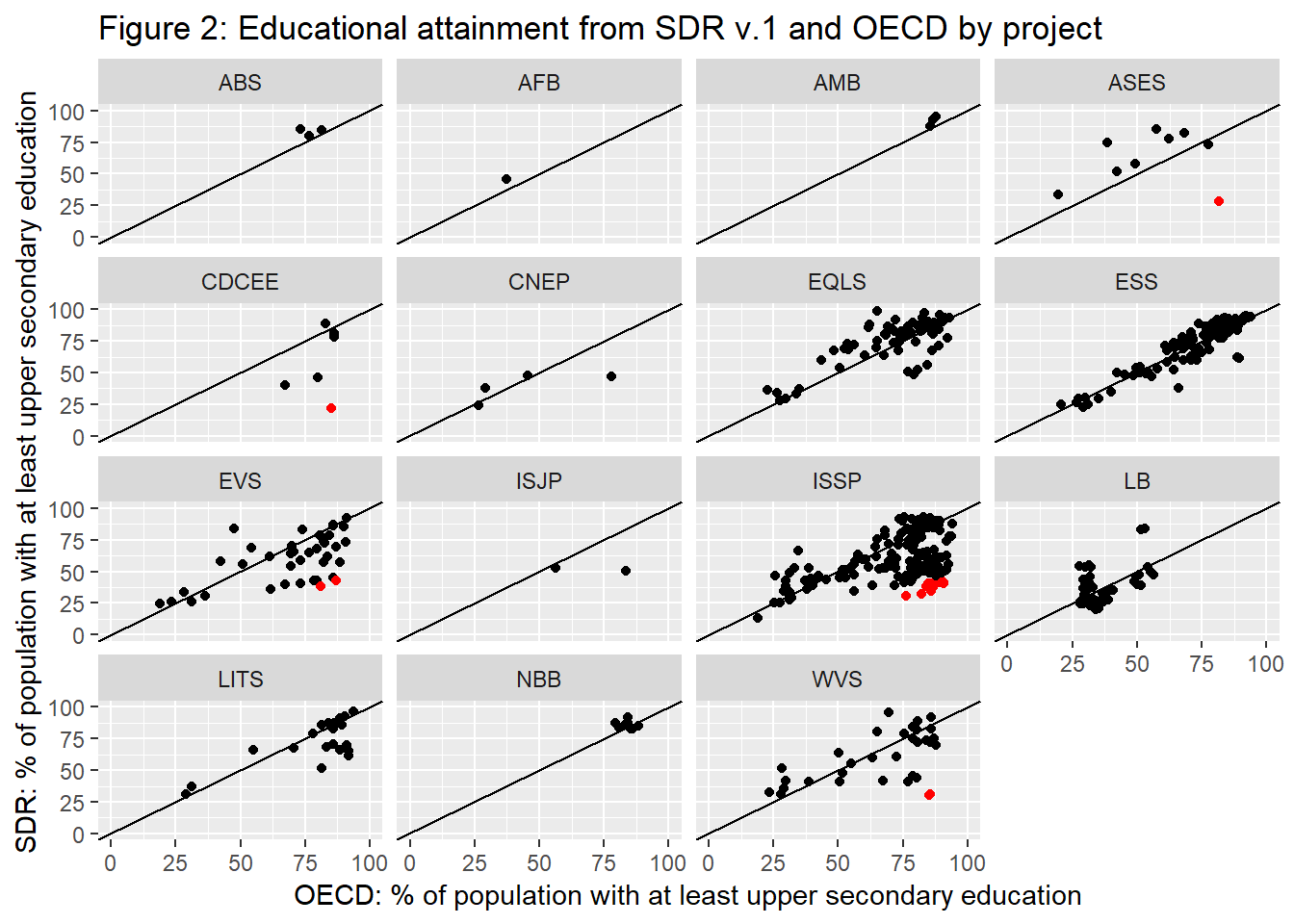 The curious case of ISSP Switzerland

ISSP surveys in Switzerland are a particularly interesting case. As shown in Table 1 below, the time series starts with survey proportions of respondents with at least upper secondary education (column “SDR % HS+”) of around 90% in 1996, drops to around 40% in 1998, stays low until 2010, and then increases back to 85% in 2011. Note that only selected waves of ISSP are included in SDR v.1. Also note that survey proportions from 2006 and 2007, and from 2008 and 2009 are identical; this is because these two waves were carried out together on the same sample.

Further investigation required digging into the original data and documentation, which benefitted from the help of Przemek. It turns out that some ISSP waves have two variables capturing respondent’s education level: one is country-specific and the other is recoded to a common scheme across countries by ISSP. For example, in ISSP/2007, the country-specific variable for Switzerland (ch_degr) has 14 categories (including one for missing values). The degree variable is the recoded one and has 7 categories (also including one for missing values). The frequencies in both variables are nice enough to make a relatively safe bet as to how ch_degr was mapped onto degree by the ISSP team. Przemek and I checked the SDR v.1 documentation and the code used to harmonize education variables from ISSP. It turns out that the source variable used for harmonization if ISSP/2007/Switzerland was the recoded degree variable. The scheme in Table 2 shows how the three variables are related.

It seems that the problem lies in the recoding from ch_degr to degree, especially in the value labels “Lowest formal qualification”, which suggests primary school completion, as it was coded in SDR. Meanwhile the category “Lowest formal qualification” in degree includes both “Primary school” and “Secondary school” from ch_degr, which would be assigned different ISCED codes. As a consequence of the misclassification of “Lowest formal qualification”, “Above lowest qualification” was understood as levels above primary, i.e., lower secondary, but not necessarily completed upper secondary.
An alternative (hypothetical) mapping presented in Table 3 uses the country-specific ch_degr variable as the source and maps it to categories of SDR’s t_edu. In this scenario all the categories highlighted in blue would be assigned target codes corresponding to upper secondary education or more, resulting in the share of respondents with at least upper secondary education of 86%, i.e., matching the OECD value.

Data dictionaries of the source variables for t_edu (i.e., the non-country-specific education variables) from other ISSP waves (see Appendix) show that the “Lowest formal qualification” category is present in all those ISSP waves (2004, 2006, 2007, 2008, 2009, 2010), where ca. 40% of the Swiss sample in SDR has at least upper secondary education. The earliest and latest wave of ISSP (1996, 2011) have different sets of response categories in the recoded education variable, which did not result in such errors when harmonizing them in SDR. The relevant variable in ISSP/1998 does not have the “Lowest formal qualification” or “Above lowest qualification” categories, and yet the share of respondents with at least upper secondary education based on the harmonized t_edu variable in SDR is less than 40. This requires further investigation.

Comparing the distribution of survey variables to data from non-survey sources can help identify errors in the recoding or harmonization of survey data and potentially reveal other surprises. A simple comparison of sample proportions of respondents with at least upper secondary education from surveys in the SDR v.1 dataset to analogous data from OECD led to the identification of samples with large differences between these two measurements. The examination of data and documentation from ISSP/Switzerland suggests that errors might have originated from the conversion of country-specific education variables to an education variable with uniform coding for the whole ISSP wave. Investigations of other surveys and projects can provide new insight.
This situation also proves the importance of clearly identifying the source data and variables and all transformation in harmonization projects, so that users can trace back the error to its source – in the case of educational attainment in ISSP/Switzerland it seems that the problem is not in the original measurement, but in the subsequent transformations.